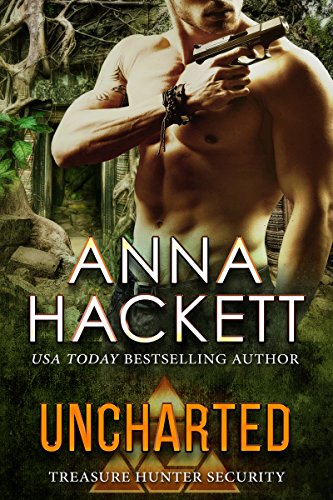 Former Navy SEAL Callum Ward has one motto--live life to the fullest. He saw the worst of war and lost good friends, but now he works for Treasure Hunter Security. When he's not providing security for archeological digs and invaluable museum exhibits, or off on daring treasure hunts, he's rock climbing, racing, or skiing. Nothing--and no one--has ever tempted him to slow down...until on an expedition into the Cambodian jungle, he has to work with one opinionated, prickly photographer, Dani Navarro. But soon their straight-forward trek to find a lost temple turns deadly, and Cal and Dani find themselves under attack from a dangerous black-market antiquities ring prepared to kill.

Dani Navarro lives for her photography. For years, it's been her escape from her family and their frivolous lifestyle, affairs, and dramas. With her camera in hand, she travels the world, capturing other people's moments and avoiding messy entanglements. At first, she thinks Cal Ward is no different from all the other men she's known, but as their expedition turns into a hazardous dash through uncharted jungle, she uncovers a tough, intelligent, and sexy protector. Together, they must outwit their pursuers and find not only a lost temple...but a priceless, powerful artifact.

Note to readers: This action-adventure romance contains a lot of action (think lost temples and wild chases through the jungle), cool offsiders (sexy former Navy SEALs) and a steamy romance (lots of sexy times between a former SEAL and an independent photographer). This is treasure hunting Navy SEAL style. So if you like it fast, and fun, and sexy, this is for you!

Q & A with the Author

Q - How would you describe Treasure Hunter Security?
A - Treasure hunting Navy SEAL style! I like to call this my Indiana Jones romance series. All the books star tough, sexy former Navy SEALs who now work for Treasure Hunter Security. Dangerous archeological digs - no problem. Daring expeditions - sure thing. Museum security for invaluable exhibits - easy. Each book has a fast, fun thrill-ride adventure set in some exciting locales.

Q - Why did you want to write the series?
A - I love action, adventure and romance. I have also always been a huge fan of ancient history. In Treasure Hunter Security, I get to combine my passions: action, adventure, sexy romance and some real-life history, myths and legends. I do *a lot* of research for these books. Each story explores some ancient myth or legendary treasure and takes us to something thrilling locations: from the desert sands of Egypt to the dense jungles of Cambodia to the cloud forests of the Andes.

Q - What order should I read the books in?
A - All the Treasure Hunter Security books are stand-alone adventures. However, characters from the early stories do appear in later books, and there is a slight overarching story with the black-market antiquities thieves our heroes face. So I think it adds something to the reading experience to read them in order. Here's the order I suggest: